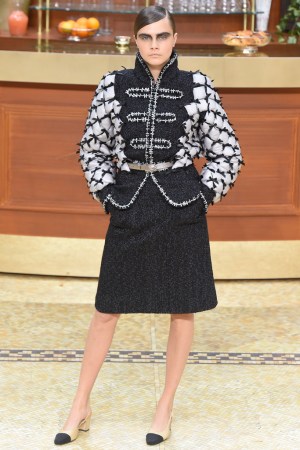 Welcome to Brasserie Gabrielle, a place where the foreign-born proprietor celebrates the innate Franco traditions of diversity, resulting in debate and most of all, style. And if delighted patrons indulge in a croissant or 10 a.m. flute of Perrier-Jouët, well, there’s plenty for all. This foreign-born proprietor leaves nothing to chance, and can afford the attention to detail; he’s well-funded by virtue of a long-term superior employment situation that has more than panned out for all involved, the vast global network of Chanel clients included.

Guests arrived to the Grand Palais, transformed into a vast brasserie with all polished wood, leather and brass atop an intricate faux-mosaic floor, yet another manifestation of the wondrous power-fashion fusion that is Karl Lagerfeld’s Chanel. The idea to celebrate something intrinsically French came to him because he’s tired of French-bashing. “I’m not French, so it’s easier,” Lagerfeld said during a preview. “If I were French, to do it would look chauvinistic and stupid, but I’m a stranger.”

Still, he couldn’t resist a little dig at a national debate focused on “la théorie du genre,” which in February saw protests here in reaction to school programs intended to discourage gender stereotyping among children. Lagerfeld’s solution: Have his adorable godson Hudson Kroenig (accompanied by dad Brad) arrive clutching a toy Ferrari in one arm and a specially commissioned Coco doll in the other.

What exactly this has to do with the Brasserie or fall fashion — well, nothing, really. Lagerfeld’s mind operates at such warp speed that he’s a constant well of ideas, and if one or two fly in out of context, so what?

A musing about gender studies didn’t distract him at all from a powerful Chanel collection. (In fact, he sent a few men out on the runway; they looked tweedy terrific.) It was impossible to take it all in; delightful though the set, it didn’t allow adequate viewing time from all vantages. The girls came from two directions, rushing around the huge oval bar before stopping briefly for photographers and going on their way, finally settling onto bar stools or banquettes. But you got the point — an impressive array of clothes, particularly for day, with plenty of that virtue du jour, diversity.

There were senses of both classic Chanel and classicism upended. Suits, some with blouson jackets, were crafted from puffed squares of paper-thin leather; others, in tweedy plaids, featured skirts with deep bias borders. But Lagerfeld also made a big show of sportif, as in separates, Chanel-style: patterned sweaters and skirts under glittering parkas; sweater, skirt; cardigan layered over classic jacket and jeans; V-neck pullover stretched into a sweater gown.

There was even a riff on workwear: short and long takes on waiters’ aprons (tweed or embroidered; never white) tied on over pants. Into the mix, Lagerfeld incorporated young, fresh trapeze LBDs; frou in black and white; and, in a pret-meets-haute moment, a huge triangle coat in a divine dissonant union of plain gray wool and frenetic jeweled feathers. His accessories: An oh-so-sensible slingback (great on the models; mumsy alert to a broader constituency) and white plates as handbags. Proprietor Lagerfeld always serves his fashion feast with a side of fun.