The most striking thing on Giambattista Valli’s fall runway was the plethora of pants. 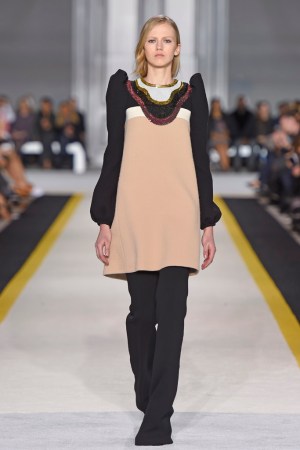 The most striking thing on Giambattista Valli’s fall runway was not his trippy floral treatments and graphic motifs that brought to mind midcentury interiors deliberately clashed according to the ugly/pretty formula of bad taste gone good; it was the plethora of pants. The majority of the collection was shown with flared trousers, lean and elongated through the leg — the silhouette Valli favors, though he typically doesn’t send it out in such numbers. Change is good.

The designer known for his PYT dresses seemed to be diversifying, embracing the late Sixties/early Seventies shapes of his spring collection — shifts and tunics over pants — with increased vigor, putting the focus purely on daywear, or at least what qualifies as daywear in fashion shows. The pants had a great line. Too bad Valli obscured it under shift dresses, or extralong tunics depending on one’s point of view.

Separately, the pants and tops were done in simple, wearable shapes, which the designer went out of his way to offset with psychedelic colors — pink, acid green, black-and-white splashed with graphic red — and prints. Many of the dresses had wavy embroidered yokes or lavishly ruffled high necklines and blouson sleeves for a folkloric effect. At times the jarring pattern plays and exuberant decorations were excessive, though that was the point. Affixing a gold bird to the collar of an embroidered shift and matching pants in a pink, green and black wallpaper print, for example, was not a gesture of understatement.