Under a trio of geodesic domes installed on the grounds of the Louis Vuitton Foundation, Nicolas Ghesquière showed a collection with hints of the futuristic edge he loves. 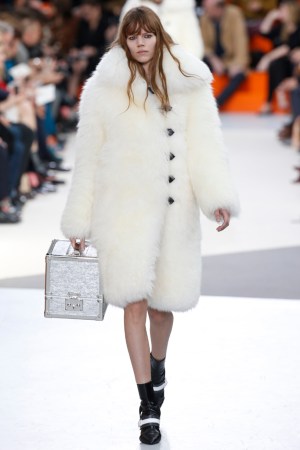 “The Louis Vuitton woman is not on a pedestal,” Nicolas Ghesquière said backstage before his show. “She’s very down to a certain reality.”

When did the fashion pedestal become a negative? Oh, for its return! Ghesquière spoke in response to a question about his shoes, mostly manageably low heels, as he wants his customer “to be moving, to walk easily.” But his comment reads as well as a statement on where fashion is today, the relentless reality that has some of us who remember a more inspirational time in fashion feeling old and uncomfortably nostalgic. On a pedestal. Sounds like code for elevated fashion. Isn’t that supposed to be the runway’s purpose, at least in part?

This collection, Ghesquière’s third runway effort for Vuitton, pulsed with the tempered urges of a great designer negotiating that intense territory between natural instinct and perceived mandate. Despite the girl-next-door styling, one could extract a futuristic subtext that, if pushed a soupçon more, would have reflected more obviously the amazing setting, a trio of huge geodesic domes installed on the grounds of the Fondation Louis Vuitton. Ghesquière opened with outerwear, big puffs of white Argentinian shearling, their edgy polar-bear coziness enhanced with fabulous hard, trunklike handbags in silver leather and diamond-cut Plexiglas, fitted internally for every electronic device imaginable.
Ghesquière got inventive with materials and cuts. Interesting ribbed-knit constructions had an aura of aggressive flirtation, curvy with a horizontal slash above the bust and skirt ending in a structured ripple. Modernist studded embroideries transported similar shapes from day to evening and looked great. As for the cuts, stretch jersey dresses sprung from a lingerie inspiration were spliced, inset and zipped with ergonomic bravado that referenced clearly without mimicking Ghesquière’s brilliant work of yore.

So many possibilities to push, powerful possibilities! Instead, Ghesquière wove in basics, a lot of them — plain-as-could-be pantsuits, sweater over miniskirt, red sheer T-shirt and pants. Once upon a time (five years ago? Ten?) such looks would have remained in the showroom, quieter cousins to the exaggerated runway point-makers. They even had a name: the commercial collection. Today, runway to reality is often a short trip.