“Baroque duchess steps into a Chinese landscape painting,” is how Wang Chen Tsai-Hsia described the aesthetic of her fairy-tale fall lineup. 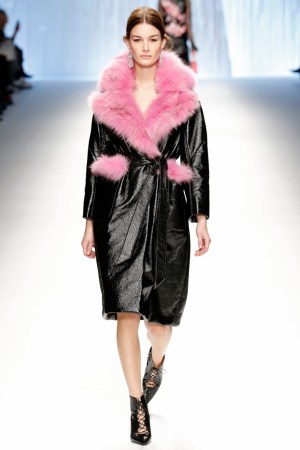 “Baroque duchess steps into a Chinese landscape painting,” is how Wang Chen Tsai-Hsia described the aesthetic of her fairy-tale fall lineup. With this picture in mind, the Taiwanese designer turned out a collection rich with feminine silhouettes — although many were better suited to a theater staging of a Chinese folktale than the streets of Paris.

There was no shortage of eye-catching embroideries, mostly landscape, done in sequins, lace, ribbons or fluffy balls of fur, which stood in stark contrast to a handful of surprisingly restrained and moody numbers, rendered in black. They included a cape-coat hybrid thrown over a ruffled dress as well as a high-neck organza gown that read Gothic chic. It would have been interesting to see what the designer could have done with the lineup minus the gaudy embellishment.