As with spring, the fall show took place in the Saint-Germain-des-Pres store, which was transformed into a darling literary cafe pop-up. 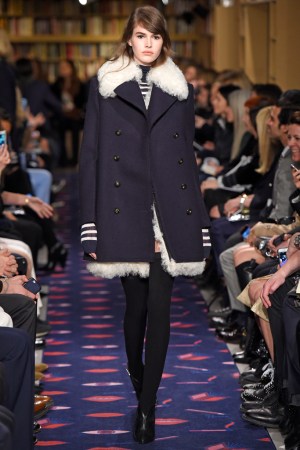 Julie de Libran arrived at Sonia Rykiel last spring with a firm handle — but a light touch — on the personal aspect of the brand. Sonia Rykiel is not just a label, but a woman with a shiny personality that she’s passed down to her daughter and granddaughter, both still actively involved in the business. It’s part of the charm. De Libran has taken great care to capture that intimacy in her collections, the clothes and the runway atmosphere.

As with spring, the fall show took place in the Saint-Germain-des-Pres store, which was transformed into a darling literary cafe pop-up (two more are planned for London and Tokyo) filled with 50,000 books with titles on visual arts and erotica for the dressing rooms, where mirrors encourage self-discovery, as show notes pointed out. The Rykiel muse desires intellectual and visual stimulation.

De Libran’s collection delivered the latter by referencing the looking glass. “Mirrors never lie,” she said during a preview. “You have the reflection, and you get so much light.” She turned the concept literal on sassy silver leather flared jeans, a grommeted miniskirt and an apron dress in silver and black snakeskin stripes. On the reverse, loads of rich, light-absorbing velvet brought an attitude of depth and mystery. Some of the best looks came in deep navy, green and brown velvet, such as a printed jumpsuit and cape ensemble and variations on tabards worn over skinny pants.

Flashier than spring, and not just because of the theme, the collection included gorgeously glam fur knits and sequined knit dresses, both done in stripes, that were not so innocent. These were clothes made for flirting, perhaps with the cute boys on the runway who wore new versions of the classic Rykiel unisex striped sweaters.