The show was very cool, with the genuine raw energy and sense of discovery that tends to dissipate once the bandwagon raises a label’s profile. 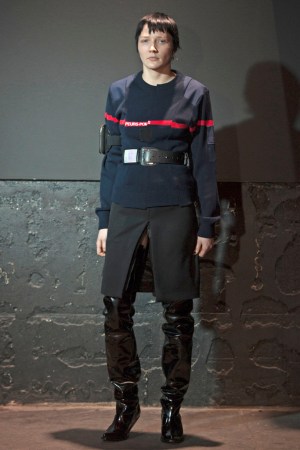 Even a whiff of the new and different is a powerful force in fashion. The buzzy intrigue surrounding year-old collection Vetements lured important people to the dingy, dungeon-like basement of Le Depot, one of Paris’s most famous gay sex clubs — surfaces covered in lord-knows-what on a nightly basis — at 9 pm on Thursday. People left excited — by the fashion moment.

The show was very cool, with the genuine raw energy and sense of discovery that tends to dissipate once the bandwagon raises a label’s profile. (The collection is on the LVMH Prize shortlist.) Kanye West’s crew, Jared Leto and established editors packed onto narrow benches lining the dark, subterranean bar and DJ booth to catch barely a glimpse of the clothes as they sped by on oddball anonymous, often androgynous models. No Karlies here.

Headed by Demna Gvasalia, formerly of Louis Vuitton and Margiela, which is clearly still on his mind, Vetements translates to “clothes,” and the collection is based on reworking generic styles with humor and gusto. Reconstructed sweaters and cargo pants that brought to mind police’ or firemen’s uniforms opened the show, while trenches were  supersized over mom jeans and men’s shirts. Aviator shearlings and sporty puffers cut XL and floorlength were fun; shrunken, awkward sweatsuits were funny and weird. Overall, the clothes seemed secondary to the energy. It may only last a moment, who knows, but Gvasalia is seizing it.