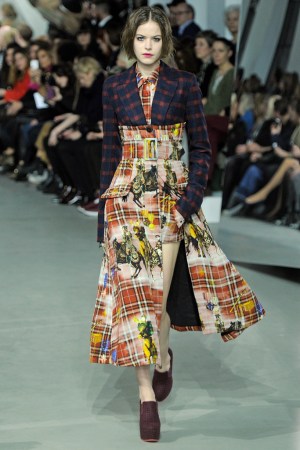 Wolfgang Joop was his exuberant self for fall. The German designer wildly contrasted floral, argyle, equestrian and animal-print motifs — sometimes all in one look. He needn’t have. This overtly busy collection looked most appealing when pattern mixing was kept more discreet. Case in point: a pretty tone-on-tone men’s shirt/samurai trouser combination in a flower print on a black background. In tandem with an Oriental coat in matching shades, it still attracted attention but in a more sophisticated, adult way.

Elsewhere, Joop played with layering, which looked fun on tailored silhouettes. Cue a blazer tucked into cropped, wide-legged pants and secured with a belted corset, which upon closer inspection revealed itself to be the lower half of the jacket.