Slimane has orchestrated the explosion of what is essentially a red-hot-high-ticket-item business around an image of familiar-looking disaffected youth. 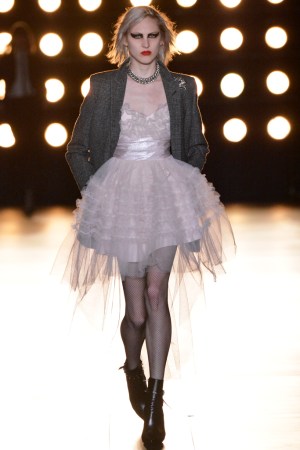 Over the past several years, a new template has emerged in fashion. While not the only major house template, it’s becoming the dominant one. This template is marketing-driven, with genuine fashion secondary (at best) to broad-based stylistic accessibility and a cool image.

Nowhere has this template been put into effect more efficiently or with greater immediate success than at Saint Laurent during Hedi Slimane’s still-brief creative tenure, which, from the standpoints of marketing and bottom line, must be considered brilliant.

Slimane has orchestrated the explosion of what is essentially a red-hot-high-ticket-item business around an image of familiar-looking disaffected youth. His shows are variations on a theme: elaborate, electronic-gadget set; retro bad girls, too-cool-for-you music; clothes you remember from high school, whether your own stint or somebody else’s.

Here, the retro pilfered more recent turf than some of Slimane’s prior outings, more Nineties than usual, on girls who, in their black-crayon eye makeup and unimaginatively ripped fishnets, ranged in type from wayward street urchin to hooker. Yet, whether a function of upgraded clothes or fashion’s old “the eye adjusts” truism, they played as less irritating than in the past. And some of their clothes impressed.

The girls walked to a song called “Pretty Boy” by The Felines. You’ve got the title, you’ve pretty much got the lyrics and an obvious connection, intentional or otherwise, to the looks on the runway, as Slimane reprised for women the skinny men’s wear on which he made his reputation. Some of the pants will fly out of the stores; others were too tawdry for the tackiest ladies of whichever “Real Housewives” franchise is tackiest. While one hopes, perhaps against hope, that the slick floozy dresses remain a runway-only wink-wink, other items should do huge business, specifically, the coats and jackets. Slimane made a big, merchy show of them — mannish overcoats, blazers, motorcycle jackets — some good, some great wardrobe-core basics, and one, a fun over-the-top intarsia fur.

But do good, basic pants, even the best basic pants, and a spiffy topper, belong on the runway? That topic — the decline of fashion expectation on the runway — has been fodder for significant conversation throughout the season, yet no one anticipates a sea change anytime soon. Once upon a time, a designer put such basics on the runway in the context of a larger piece of sartorial storytelling. With two days left to go in the fall season, more often than not, the story has been, here’s the merch; we hope it sells. At Saint Laurent, if recent history is an indicator, the merch should sell like crazy.