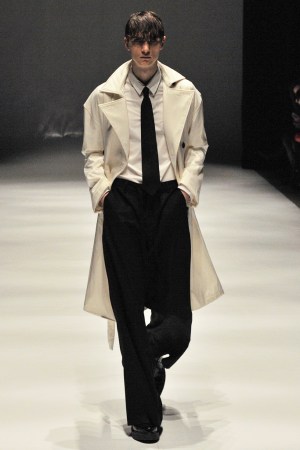 Inspired by the works of photographer Lewis Baltz, who is known for his black-and-white images of industrial buildings and desolate landscapes, Emiko Sato and Takeshi Kitazawa turned out a Dressedundressed fall collection full of tailored minimalism. The androgynous looks, from slim suits and wide-legged pants to coats in a variety of styles, were simple and modern with a touch of slouchy ease.

Given the label’s unisex aesthetic, the design duo dressed both male and female models in terry rompers, jumpsuits with tuxedo stripes down the legs and close-cut button-down shirts. The palette — similar to that of Baltz’s photos in shades of black, navy, white, beige and gray — was sombre, even on a series of paint-splattered coats, jeans and shirts. The pattern, applied to dark blue fabrics, called to mind the night sky, but also had an edgy energy.