Factotum’s collection had a modern, country feel to it. Shearling was one of the stars and there were several sharp-looking coats and jackets. 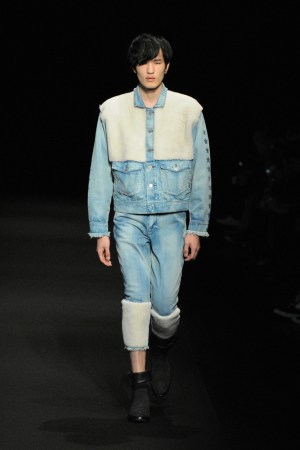 A projected panorama of a sheep-dotted countryside greeted Factotum showgoers — setting the stage for Koji Udo’s fall men’s wear outing, inspired by Haruki Murakami’s novel “A Wild Sheep Chase.” One of the Japanese author’s breakout works, the story traces the journey of an unnamed Japanese man who embarks on an adventure to the northern island of Hokkaido to find a rare sheep with a star on its body.

Appropriately, shearling opened the show, used as trim on jeans and a denim jacket, and later on several sharp-looking coats and jackets, giving the collection a modern, country feel. In a none-too-subtle nod to Murakami’s book, sweaters were emblazoned with large stars, while a few pieces in a striped woven fabric — including a long top layered under a vest and an apron worn over pants — had a shepherd-like vibe. Other highlights included outdoorsy field jackets and a cool gray coat lined in tartan. Despite the theme, this polished lineup delivered some sound choices for city-dwellers as well as their rural counterparts.