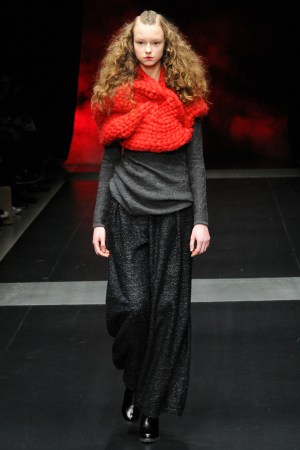 The 1991 French film “The Lovers on the Bridge” recounts the romance of a homeless Parisian alcoholic (Denis Lavant) and an artist who is losing her sight (Juliette Binoche). It served as the primary source material for Johan Ku for fall. The London-based designer set the scene with puffs of fog, which helped re-create the feel of some of the movie’s night scenes featuring fireworks over the Seine.

The collection, named Michèle after Binoche’s character, had an arty, Left Bank vibe to it. Ku placed an emphasis on knitwear — one of his specialties — and turned out extra-chunky scarves and a sleeveless, back-baring turtleneck in cherry red. He also did a whole sequence using embroidered collages of tiny bits of fabric, which were distinctive yet somber, in looks that included a gown, a minidress with a peplum, a handkerchief-hem skirt and hoodies. Driving home the Gallic theme, he worked large, scripted French text onto several pieces, such as scarves and a draped pullover.