Lamarck offered up chic, sophisticated clothes including some sharp outerwear and pieces in tweed. 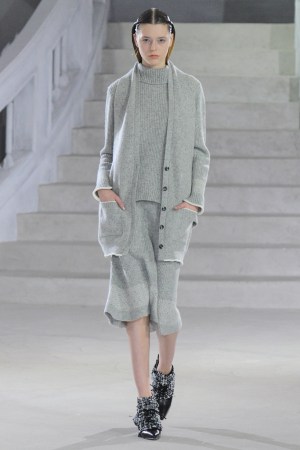 Lamarck welcomed its guests with coffee to perk up the weary on day four of a jam-packed Tokyo Fashion Week. Thankfully, designer Shinsuke Morishita delivered something beyond a mere jolt of caffeine: Chic, sophisticated clothes. “I want to express both the softness and the strength of women,” explained the designer, who named his brand after French naturalist and evolutionary theorist Jean-Baptiste Lamarck.

Inspired by the concept of layering, Morishita created a series of outerwear pieces that looked exceptionally good. Models made their way down the staircase of an art gallery wearing sharply tailored coats with double lapels, a sporty gray poncho and a fur-trimmed moto jacket. Other looks included pale blue, wide-legged cropped pants and a window-pane plaid blouse with a gathered and twisted bow, as well as several tweed pieces, including a pullover and a skirt that also featured a twist of fabric at the waist.