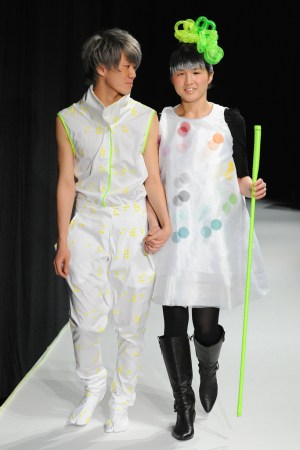 Takafumi Tsuruta is a designer on a mission to create clothes “for all people of the world.” In line with past efforts at his former label Ha ha, Tsuruta strives to design his collection with handicapped people in mind. For Tenbo’s debut runway show, he enlisted Paralympic athletes and other people with disabilities — some with prosthetic limbs — to be his models.

Tsuruta designed a wedding dress for a wheelchair-bound bride — as he did two seasons ago at Ha ha — as well as sweater coats that close with magnetic buttons, making them easier to put on and take off. While some elements repeated Ha ha motifs, such as a multicolored dot print modeled after Braille that was used for a trapeze dress and sweatshirts, there was also freshness: Images of origami cranes and large, cartoonlike skull motifs were splashed across button-down shirts; quirky styling included bright yellow wigs, nails, and glittery lips, and a voice-over described some of the garments’ construction.