The show opened with a giant needle punch globe rolling down the runway as a chorus of children sang Michael Jackson’s “Heal the World.” 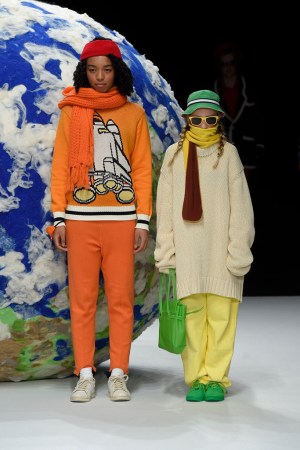 Yoshikazu Yamagata, a LVMH Prize semifinalist, chose to present his second line rather than his more conceptual label, called Writtenafterwards. The designer, who did a space-themed collection last season, said this time he endeavored to make a “return to Earth.”

The show opened with a giant globe rolling down the runway as a chorus of children sang Michael Jackson’s “Heal the World.” Yamagata said he wanted to get the audience to sing along — his staff even distributed copies of the lyrics — but most people were too busy watching the onstage theatrics to participate. The collection itself was a feel-good mix of bulky knits and jersey pants in bright rainbow colors. Whimsical intarsia sweaters bearing Earth, rocket-ship and flying-saucer motifs were accessorized with cozy hats, gloves and scarves. Clusters of multicultural models of all ages walked the runway, which the designer said was a nod to United Colors of Benetton ads of the Eighties and Nineties. The show had the crowd laughing, clapping and cheering — providing an uplifting moment during a week largely filled with darker, more somber fare.