Camels and eagles were both the starting point — and the stars — for Yoshio Kubo this season. 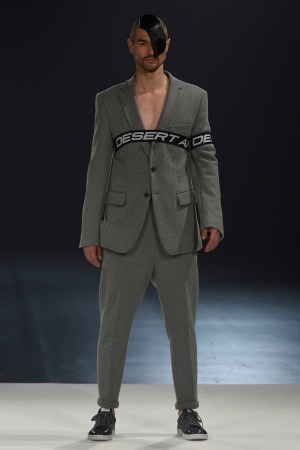 Camels and eagles were both the starting point — and the stars — for Yoshio Kubo this season. The designer behind one of Tokyo’s hottest men’s wear brands said he likes to create new things by combining two somewhat unlikely elements. That philosophy has worked well for Kubo in the past and it was the case again for fall.

As with many other Japanese designers, fabrications played a central role in his lineup. Vignettes of people riding camels were featured on prints used in multiple looks, including pants, a puffer jacket and a button-down shirt. Kubo also incorporated Chanel-style tweed accents and strips of fur into sporty jackets with an original flair. Camouflage variations (still incorporating camels) were another recurring element, appearing in tailored jackets and pants. This was a fresh and edgy collection of luxe streetwear that served up some great merch for stylish guys in Tokyo — and elsewhere.