Whether his first Saint Laurent runway show in the City of Angels is ultimately his last, Hedi Slimane did it his way. He paid an overt tribute to Yves Saint Laurent's DNA to celebrate the 50th anniversary of the Rive Gauche collection.

IsSixWeeksAfterFashionWeek = false
By Alex Badia and Marcy Medina on February 11, 2016 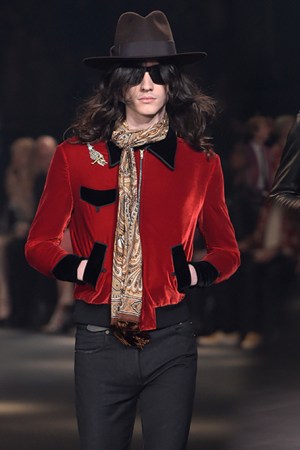 Will he? Won’t he? While many in the 2,000 person crowd gathered at The Hollywood Palladium on Wednesday night thought they knew the answer, Kering chairman and chief executive officer François-Henri Pinault, sitting front and center at Saint Laurent’s fall show, remained coy about rumors of Hedi Slimane’s departure by shrugging, “We’re discussing, we have till the end of March, no rush. Tonight is about celebrating the brand, celebrating Hedi, celebrating L.A., the music, all that. Nothing else.”

Pinault’s relaxed manner may have been a clue as to what’s to come: when pressed about whether or not there was reason to be anxious about renegotiations, he said, “Absolutely not. It’s always the same at this time of year.” A man with his mind already made up, perhaps?

Indeed, whether his first Saint Laurent runway show in the City of Angels is ultimately his last, Slimane did it his way. He‬ transferred the brand’s show from the Carreau du Temple to the Hollywood Palladium music hall in his adopted hometown, where he’s based the brand since becoming creative director in 2012. His obsession with L.A. subculture and the indie rocker cool kid precedes his arrival at Saint Laurent. In the past, he’s mined a rock-‘n’-roll grunge look with literal interpretations of thrift-shop styles based on the looks of Jimi Hendrix, Kurt Cobain, glam rockers and present-day Coachella-goers. But this time, in showing the complete men’s collection and “part one” of the women’s collection — 94 looks total — Slimane also paid his most overt tribute to Yves Saint Laurent’s DNA, to celebrate the 50th anniversary of the Rive Gauche collection.

That the evening glorified the Los Angeles music scene was abundantly clear looking at the Grammy-worthy front-row, including Sam Smith, Lenny Kravitz, Justin Bieber and Lady Gaga — who was momentarily unrecognizable in a curly blonde wig. “I’ve known [Slimane] a long time,” she said. “He’s made it cool for young kids to look like rock stars.” Gaga seemed to speak for the collective audience when she added, “I’m so excited to be here.”

While the venue was pure Hollywood spectacle and the after party featured music by 11 acts including Joan Jett and Beck­, the fashions were more French luxe than usual — think women on their way to Maxim’s. It was a dressier take for both sexes, signaled by the opening look of a three-piece men’s tuxedo over a polka dot silk shirt with oversize velvet bow tie, topped off with the omnipresent flat-rimmed fedora. The show featured the entire men’s collection and “part one” of the women’s collection.

If the overall show vibe felt more late-Seventies than usual, it was because the women’s looks were adapted from the Rive Gauche archives of that era. Some of the most recognizable signatures — bow blouses, midi skirts and gilded brocades — comprised the dominant silhouette, along with culottes and caftans. Slimane even reused the iconic 1982 Musical Note print threaded in silver on one black velvet midi skirt.

All appropriations aside, Slimane has turned Saint Laurent into a social network-driven phenom. His knack for creating covetable hot-selling accessories is part of the reason the house’s revenues are up by double digits. The key pieces were still the most sellable: skinny pants, velvet blazers, top coats and biker jackets.

Lest anyone forget that this show was taking place smack in the middle of Grammy and Oscar week, Best Supporting Actor frontrunner Sylvester Stallone was seated next to Pinault and revealed, “I’ll be wearing Saint Laurent to the Academy Awards, my first tuxedo by Hedi Slimane.”