This polished, high-shine collection was a medley of some of Christopher Bailey’s passions. 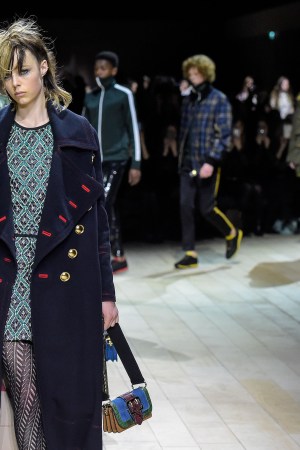 This polished, high-shine collection was a medley of some of Christopher Bailey’s passions — snazzy military tailoring, the Mitford sisters, the Bloomsbury Group — and some of his favorite art and music. “Glam rock, with wellies,” he said after the show.

He countered masculine military overcoats — which were piped in red or yellow — with a battalion of glittering dresses. They came short with flippy pleated skirts; quilted or textured to resemble lightweight tapestries, or long with fluttery sleeves in a nod to the bohemians of Bloomsbury.

Bailey worked with lamé, Lurex and real metal yarns to give his silhouettes an insectlike iridescence, as in one short and sweet claret-colored dress, or a longer one, dark green with flashes of printed python georgette. Others still came in colorblocked glossy python, or with pleated skirts and gently ballooning sleeves.

Sometimes, shine came from crystal embellishment and sequins, as in a cluster of minidresses that shone with a magnified flower pattern.

Outerwear — when it wasn’t doing military duty — came in materials such as bright green python, blanket plaid, technical down, high-shine leather and with details such as oversize toggles and fur. The collection echoed Bailey’s men’s wear outing last month, which was filled with rich, embellished outerwear.

For the first time — and as a harbinger of September’s game-changing in-season show — the entire collection was put on display at the brand’s Regent Street flagship straight after the show. As reported, it will remain there for a week before moving to Burberry’s Faubourg Saint-Honoré flagship in Paris. Shoppers in both cities will be able to pre-order some pieces from this upbeat, salable collection.