Henry Holland hangs out with enough party girls to know precisely what they want to wear when they're dressing up for a night on the town. 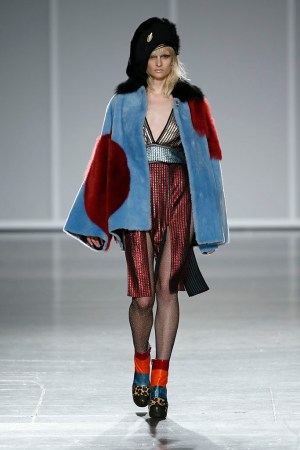 Henry Holland hangs out with enough party girls to know precisely what they want to wear for a night on the town. This season, after seeing the Sonia Delaunay exhibition at the Tate Modern, he was moved to bring together the Twenties and the Seventies in a fun, dance-floor-ready mashup.

“They were two of the greatest party decades,” he said after the show. “And during our research, we saw that a lot of groupies in the Seventies were wearing vintage pieces from the Twenties, so it made sense.” He nodded to the flapper generation with drop-waist dresses, scalloped hemlines and beaded fringing on sequined dresses, while leopard shearling coats, jewel-toned lamé and a belted smoking jackets in gold foil paid homage to glam-rock divas.

A trio of looks with the collaged features of Cher, Debbie Harry or Liza Minelli were tongue-in-cheek cool — the kind of kitsch that only Holland can pull off. And the full-on sex appeal of a rubberized red lace pencil skirt was amplified by the black lace bralette and fluffy tiger coat that accompanied it.