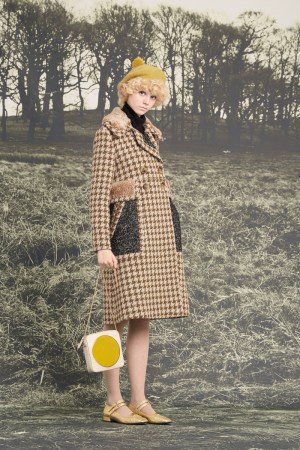 Orla Kiely is changing tack: The London-based designer cancelled her usual presentation last month, preferring instead to debut the fall 2016 collection, which she dubbed Orla La, in her showroom, by appointment.

“We were trying to imagine Anna Karenina transported into a film like ‘A Kind of Loving,’ but bringing her to the north of England,” said Kiely. “It’s a bit more gritty, a bit more textural and tweedy.”

The designer worked with a range of textures — tweed, mohair, wool — and blended them into cozy outerwear. Standouts include a brown houndstooth print coat with a shearling collar and pockets styled over a black polo neck and a black pencil skirt.

Day looks include printed dresses with patterns influenced by nature and the northern English moors in a georgette fabric. Abstract leaf and tree prints covered dresses with pleating details, some with a bow neatly placed on the collar. A pink organza dress was done with ruffles across the chest and worn over a slip dress. Kiely balanced her palette of earthy browns, mustard and green with light pastel hues.

For accessories, the designer took her initials and fused them into structured, glossy leather handbags and small leather goods. One structured, boxy bag with a gold chain featured different skins, including polished natural leather, shiny leather and crocodile.

New this season was a lineup of shiny leather schoolgirl satchels with magnetic closures. They were done in two-tone pink and brown. Kiely rounded out her lineup with jewelry pieces including an oversize flowers and bees, pinned on coats and dresses.