Inspired by "Little Lord Fauntleroy" and the Buffalo movement, the collection had a tough eccentricity. 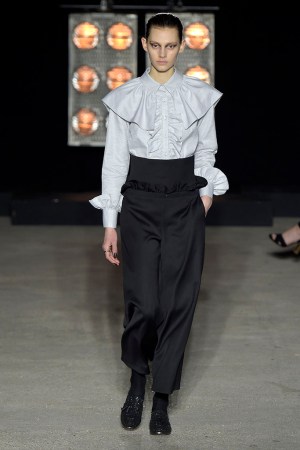 There was a dark, kooky opulence to Osman Yousefzada’s intriguing collection. The designer said the idea of “Little Lord Fauntleroy mixed with the Buffalo movement” was his starting point, which lent the clothes a tough eccentricity.

Looks that telegraphed this idea included a broderie anglaise shirt with an extravagant frilled collar and floppy cuffs, worn under a bomber jacket and paired with a skirt with cutout details. And a gold leather shirt with a ruffled bib was teamed with mannish culottes — complete with a pocket chain — and a fur collar.

Adding to the more-is-more aesthetic was a bold poppy motif, that appeared as everything from a single flower embroidered on a white lace maxidress, to a print on a full silk skirt and matching tailored jacket. It also bloomed on some of the men’s looks the designer sent out, such as a tuxedo suit with cropped pants in the silk poppy print.

While there was a lot to take in, this off-kilter mix had a charm — and, plenty of salable pieces under the statement-making styling.