Ennio Capasa returns to his Nineties heydays, hoping to rekindle the impulses that propelled Costume National as a purveyor of urban cool. 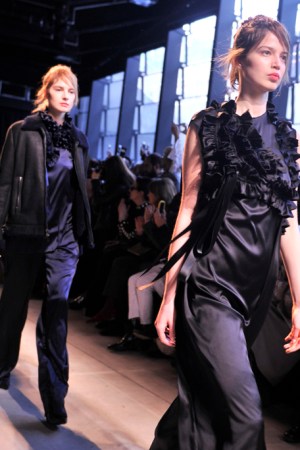 Ennio Capasa has no time for today’s accelerated fashion system. “I prefer slow fashion,” he said backstage, his mood board pinned with photos of Marina Abramović, Yoko Ono and Björk — free-thinking mavericks all.

The designer keeps returning to his Nineties heydays in hopes of rekindling the impulses that propelled Costume National as a purveyor of urban cool. Men and women shared the catwalk, just like the early days when budgets were meager. Both sexes wore demonstrative outerwear, in rich textures and in the oversize proportions popularized by Demna Gvasalia at Vetements, whose streetwise edge has cast a long shadow on the fall 2016 season.

A beefy, low-slung shearling caught the mood of the moment, as did a shimmering green coat with mannish airs that, like other outerwear, had slashes that could be unbuttoned to add extra swagger. Flaring trousers did the same trick with side snaps.

Yet much of the collection, in familiar fabrics and runny shapes, could use a dash more modern energy.