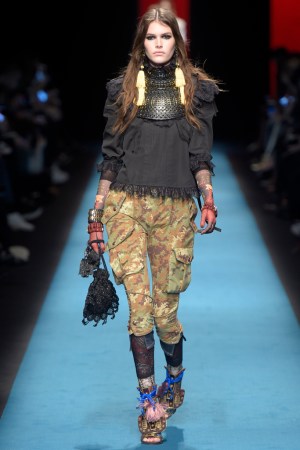 Dan and Dean Caten’s fall 2016 Dsquared2 collection was basically a rerun of fall 2015. Both were mash-ups of military tailoring, classic feminine grandeur and savage opulence, but the Inuits of last year were replaced by incoming samurai. Aristocratic heirs became delicate and dark Victorians. The shapes remained similar: Tight layers of nipped jackets, blouses, tattoo body stockings and hip-slung cropped stovepipe cargo pants were packed into a skinny silhouette and set atop teetering heels festooned with exotic beading, chunks of armor and giant tassels that matched the extra long earrings that swished down to the model’s collar bones.

“It’s a warrior world,” said Dan backstage, noting that the collection was partially inspired by Beyoncé’s performance at the Super Bowl.

The Catens have always taken a put-it-all-out-there approach to the runway, leaving no bell, whistle, fur, trim or, in this case, tassel left behind. The only way to think about the clothes realistically is to consider them one item at time. To that end, the lineup had much to offer in terms of items: A soft faded pink high-neck Victorian blouse with antiqued lace around the shoulders; cropped black cigarette pants with dark romantic embroidery around the waistband; a taut denim military jacket under a denim and velvet cape; a chunky green army sweater over a beautifully embroidered black skirt cut in panels with undone ties at the sides.

A few head-engulfing furs with elaborate samurai embroidery were marvels of craftsmanship. They would be suitable for defending the empire against Mongolian invaders or defending your turf as empress of street style.