Jeremy Scott turned up the heat at Moschino with Bonfire of the Vanities-inspired fall collection. 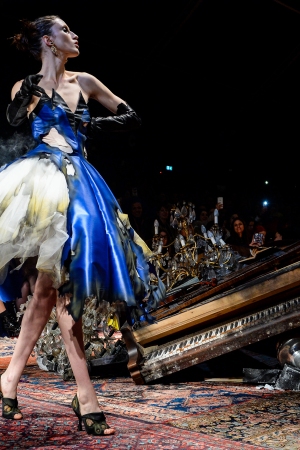 Something was different. Jeremy Scott’s fall Moschino show didn’t have the fizzy pop atmosphere of his previous collections for the house. No Barbie, no couture car wash. The set — a lavish spread of Oriental rugs, rundown Baroque chaises, crystal stemware and gilded mirrors that looked as if Scott had raided a chateau — seemed semi-serious in its decaying grandeur. And the majority of the show, defined by biker gang debutantes wearing hybrids of black leather biker jackets, fancy evening gowns, white ribbed tanks, distressed denim, and Eighties pouf dresses, didn’t have the joke-a-minute mentality that Scott typically cranks up. In fact, you could see more of Franco Moschino in the work than ever. The denim, dramatically wrapped and bustled evening gown tops and leather biker skirts, didn’t feel that far-fetched. Has Scott moved beyond the punchlines? Not really, but he wasn’t as giddy for fall.

Backstage before the show, Scott clarified his decrepit opulence: “It’s inspired by the Bonfire of the Vanities.” Not the Tom Wolfe 1987 masters of the universe masterpiece, though the collection had more than a taste of Eighties nouveau riche fashion, but the actual bonfire of all things vain and decadent in 1497 in Florence. Wolfe titled his novel after the real deal, and Scott got literal with the references. He lit a proverbial match and the show sparked. Toward the end, riffs on cigarettes and addiction came in bags that looked like packs of Marlboro cigarettes — here, branded “Moschino,” obviously. Warning: Fashion kills. A take on a classic Le Smoking was tattered to look like it had gone up in flames. The look was topped with a clever hat, a Surrealist gloved hand holding a cigarette holder, poised to ash all over the outfit.

Once the model wearing a dress as close to an actual chandelier as it gets hobbled down the runway, the crowd was into it, on their feet, iPhones positioned. A series of singed gowns in old-school couture silhouettes and Eighties prom styles, some with individual smoke machines hidden under the skirts to fan the kitschy flames, strode by, pausing to pose in a giant mirror frame, the perfect photo op. Asked how he chooses his themes, Scott was simplistic in his response. “I was thinking about cigarettes and people’s addiction to fashion,” he said. “I don’t ever really dissect and wonder why I’m doing it. I just do it and put it out there.” Point and shoot. — Jessica Iredale