For fall 2016, Miuccia Prada examined "pieces" of the real woman, she said, "difficulties, love, no love, pain, happiness." The results were rich and multitextured. 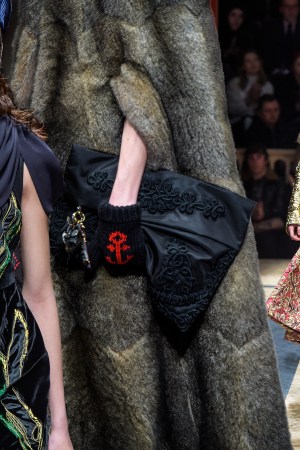 Miuccia Prada is a deep thinker who translates those thoughts into the stuff of sartorial splendor on her runway. She is also a savvy practitioner of fashion in the clinical sense. The collection she showed on Thursday reflected both sides of this complex woman. It proved spectacular and provocative on dual levels.

For fall, Prada looked at “pieces” of the real woman, she said backstage. “We need to understand who we are now….Maybe it’s useful to look back to the different characteristic moments, difficulties, love, no love, pain, happiness, different kinds of women: sexy, boring, traveler. So this was the main concept.”

The clothes were exquisite, and no less compelling for being the obvious full-flower results of seeds planted during Prada’s men’s show in January, when she put a number of women’s looks on the runway. Then as now, she worked with artist Christophe Chemin on a series of prints, here linked to the changing seasons — thus the seamless interplay of outerwear weights, airy transparencies and everything in between. Prada started with tailoring in impeccable coats cut with military precision and fastened with external corsets — bright white to match the sailor caps repeated from the men’s show, their stark white vibrance in high contrast to the mannish fare beneath. The lacings reflected the argyle patterns of heavy tights, updates on legwear Prada introduced years ago. Other such juxtapositions — a corset in men’s wear plaid strapped over a delicate floral blouse and skirt; a rugged leather coat with a thick fur border over a corseted, printed shirt and openwork cashmere hose, sans skirt — spoke to the complicated sexuality that features prominently in Prada’s work.

In Prada’s world, nothing is linear. She went through a range of looks and moods, various personifications of womanhood — elegant in golden brocade jacquards; ready for the storm, whether literally or figuratively, in foul-weather gear with huge caution pockets in red and yellow. Chemin’s prints were integrated as part of the textured whole: a bold black-and-white floral skirt under gold jacquard coat; a graphic mythical creature in black and white spliced into the skirt of an otherwise mundane pink and white floral dress. It mesmerized.

That was Prada the creator. Prada the fashion practitioner made a different kind of statement by picking up so directly from her men’s runway, both Chemin’s repeat engagement and the very specific and memorable styling tropes — the sailor caps and argyle accessories. Consciously or otherwise (one can’t help but think it’s the former), Prada telegraphed that perhaps fashion should slow down a bit, and that what’s fabulous in January should be more than February’s old news.