Taking his cues from early 20th-century bohemianism, as well as the occult and Sixties rock, Peter Dundas turned out a collection for rich witches. 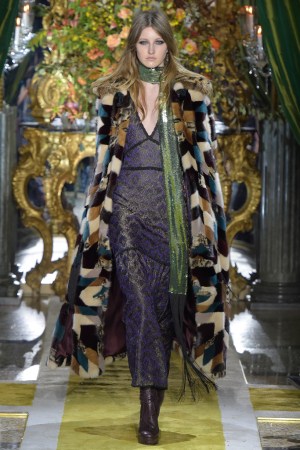 Backstage before his second women’s runway show as creative director for Roberto Cavalli, Peter Dundas’ eyeliner seemed to foreshadow the fall collection as much as the set — a candelabra-lit courtyard complete with a harpist, leading into a grand palazzo that was elaborately set with palm trees. Between the spectacular chandeliers and the generous trays of Champagne circulating, there was enough crystal in the room to make a hand-cleaning crew cry. Understatement was not coming down the pike.

Dundas took his cues from early 20th-century bohemianism. “I was thinking of Orientalism through the Thirties and illustrator Aubrey Beardsley,” said Dundas. “It was about decadent women idols of that time, as well as mysticism and the occult.” His girl was a rich witch, one who didn’t care how much it cost and if it would make people stare.

A procession of opulently-turned-out, glam-rock gypsies came in deep purple velvet, patchwork intarsia mink, jewel-toned jacquard, tiger-printed fur, fringed silk and shiny lame. They wore long, skinny neck scarves and snakeskin platform boots. That the hedonistic, high-glam hippie is not a new look by any means, was something that Dundas tacitly acknowledged. His show notes were punctuated by references to aesthetes from times past — Led Zeppelin, Janis Joplin, Gustav Klimt, Theda Bara — and he noted that the collection was meant as a continuation of his retro rocker fall men’s line.

If not groundbreaking, the material offered Dundas a comfort level. He showed his expertise with it. The outerwear, mostly cut in sinuous lines, included endless divine options — a cape with lavish Art Nouveau embroidery; sweeping velvets — for a special occasion topper, as well as at least one cool, down-to-earth style: a long denim overcoat with an undone hem. There were extralong flared pants and bell-bottom jeans; a cropped patchwork snakeskin jacket and vintage-y T-shirts. Dundas kept old-school rock alive and with it, last year’s naked dress phenomenon. There were several long, beaded tulle gowns that offered “full coverage” while revealing almost everything. May that trend rest in peace soon.