Stella Jean dug into African and European cultures for her fall collection of rowdy tribal treatments and silhouettes that, thankfully, were controlled. 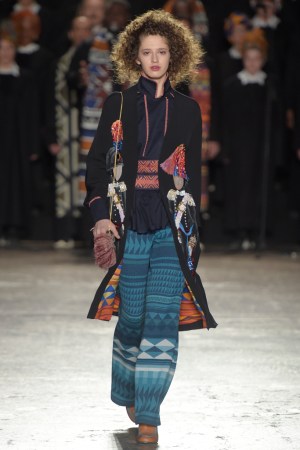 Reading Stella Jean’s show notes felt like being issued the syllabus for the Anthropology 101 class you didn’t sign up for. The collection was about “the socio-anthropological and the artistic parallels between two familiar and historic iconographic expressions: the Portrait and the Mask. This symmetric succession of two ‘sides’ of the same coin is projected towards two diametrically opposing temporal and geographic latitudes.”

Who writes this stuff?

At the risk of taking a simplistic and superficial view of this highfalutin two-sided coin, the collection had some nice moments and some that were overdone. Jean likes to dig into cultures. Here, the press notes indicated the regions at hand were sub-Saharan Africa and European artists. She calmed her silhouettes from last season, working in tailored outerwear, chunky knits and slim secretary skirts, which tempered the rowdy ethnic treatments. Nothing was plain, but there was a level of control. A chunky knit cardigan in a bright, multicolored checkered pattern over a plaid shirt and tribal-print skirt worked despite the cacophony of zigs, zags and colors. Sweaters and knit skirts featuring Ndebele patterns were a highlight. So were a slew of fantastic coats, including a classic coated cotton trench and two tailored styles with blanket-stripe details.

On the flip side, giant bibs with African mask and family portrait embroideries, as well as footwear that could best be explained as beaded shower sandals stuck inside clear plastic containers were think pieces.