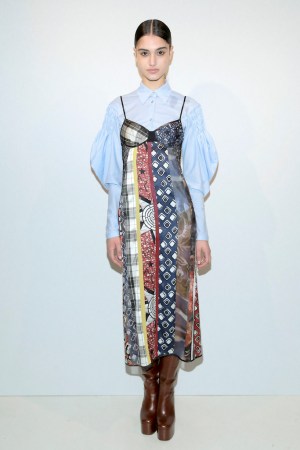 For his first season showing his Wunderkind label in Milan, Wolfgang Joop staged a presentation at concept store 10 Corso Como alongside four young designers that he invited to create capsule collections under his mentorship.

Joop said his fall lineup was inspired by the energy of Berlin in the mid-Nineties. That translated into irreverent mixes such as a silk dresses and tops in African wax prints; a houndstooth coat with dyed fur cuffs, or a shirt-weight lumberjack checked coat with a leopard-print fur collar.

He traced his approach back to the late Sixties, when his generation discovered thrift-store chic.

“I think luxury today would be a similar spirit, because those people are not working, you know what I mean? They have no place to go, really,” Joop remarked of luxury customers. “I think that’s the biggest luxury, looking a little bit moody, unpredictable.”

The designer screen-printed his coats with images including tigers and roses, or slogans such as “Well-Behaved People Rarely Make History.” Blouses with ballooning sleeves were inspired by the Biedermeier period of the early 19th century, he said.

“I want to promote myself as the teacher, as a supporter, because when I founded Wunderkind after I sold Joop, it was meant [to be] at the beginning as a roof like Bauhaus to collect young artists. I wouldn’t pretend that I’m the Wunderkind alone,” Joop explained.