A trio of artists inspired Anna Sui's groovy fall collection, a flashback to the Swinging Sixties. 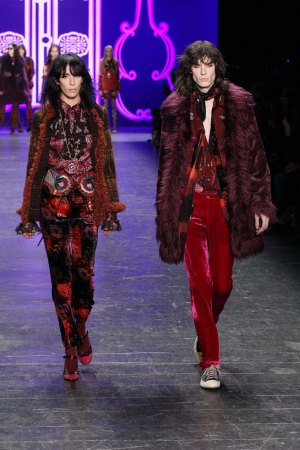 A trio of artists inspired Anna Sui’s groovy fall collection, which was a flashback to the Swinging Sixties. First, there was Peter Blake, best known for co-designing the Pop Art collage on the cover of the Beatles’ 1967 album, “Sgt. Pepper’s Lonely Hearts Club Band.” (And after the recent public relations gaffe in which Paul McCartney was denied entry to Tyga’s Grammy’s after party, it was good to see someone giving some respect to the Fab Four.)

Then there was Niki de Saint Phalle, whose family lent Sui rights to the late artist’s famous “Nanas” — colorful, sculptural works of the voluptuous female form — which Sui rendered on several looks in embroidery. Finally, there was Barbara Hulanicki, the founder of Sixties London cult label and retailer Biba, who designed a print for the collection. Hulanicki looked chic as ever in the show’s front row alongside a quartet of bona-fide Sui supermodels: Trish Goff, Michelle Hicks, Coco Rocha and Karen Elson.

All of it added up to a collection brimming with retro flair, from its rich, psychedelic colors to its wide-ranging prints — florals, butterflies, patchworks, leopards, chevrons. An oversize purple Mongolian fur-trimmed coat, ruffled shirt and tie-dye velvet burnout pants recalled the stage style of Jimi Hendrix. Elsewhere, a few looks, such as a lace bib dress layered under a sweater vest — styled with glasses and knee socks — veered bohemian geek-chic à la Alessandro Michele’s Gucci girls. Sui chalked it up to a bigger revival. “There’s something in the air, a psychedelia going around,” she said.