Greg Armas wanted to present his Assembly New York collection in the dark to emphasize the tactile quality of his fall lineup. 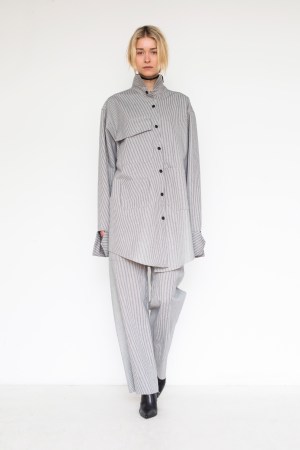 Greg Armas wanted to present his Assembly New York collection in the dark — strange as it seemed — to emphasize the tactile quality of his fall lineup. It featured cozy looks in synthetic and rabbit fur, cashmere, wool, corduroy and alpaca, all of it buttery soft to the touch. He chose Baby’s All Right, a Williamsburg, Brooklyn, bar and music venue, as the space for his packed presentation, during which a live performance by members of Chairlift, Blood Orange and Grizzly Bear — all of whom were decked out in the label’s men’s and women’s looks — was underway.

The theme for the collection — sentiment — was personal to Armas. “I was putting my own memories and experiences into the garments,” he explained, citing a camouflage jacket that referenced his childhood in Oregon, and a few coats he designed with his girlfriend in mind. “And I wanted the wearer to have an emotional connection with the garment.”

Outerwear featuring fur-lined pockets — for the wearer’s enjoyment only — was a great example. Most of the women’s looks, such as railroad-denim suiting and pinstripe jumpsuits, leaned toward a tomboy vibe. It was all wearable, utilitarian and cool, and the addition of fur made it feel more luxurious than past collections.