Qiaoran Huang and Joshua Hupper, inspired by an Asian technique of filling in cracked porcelain with gold filigree, reworked key looks from seasons past. 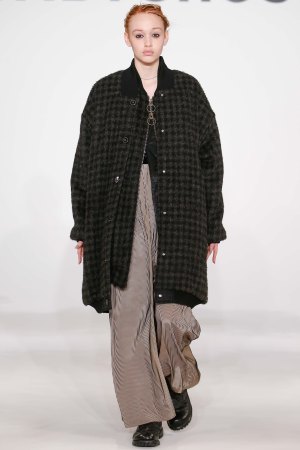 Qiaoran Huang and Joshua Hupper launched Babyghost five years ago and have since developed a distinct cult following. For fall, the duo took their best-selling items from seasons past and reworked them. “We deconstructed and reconstructed pieces,” said Hupper.

The designers, who were inspired by an Asian technique of filling in cracked porcelain with gold filigree, felt the reworked looks were even more beautiful than the originals. Hupper, pointing to one coat, noted, “We cut the lining and made the lining the outer and the outer shell the inside of the coat.”

The outerwear was terrific, with oversize shapes and interesting fabrics. The layered looks were grungy — as in slouchy sweaters paired with tiered dresses in mixed fabrics — but in a feminine way. The designers also created a marble print they worked into an easy shirtdress and the lining of their coats. For evening, they played with lace sheaths and digital sequined dresses that were a cool alternative for a night on the town.