The designer's second collection expanded on his ideas for modern eveningwear — in the eyes of someone who grew up around department store glamour and makes his living as Lady Gaga's stylist. 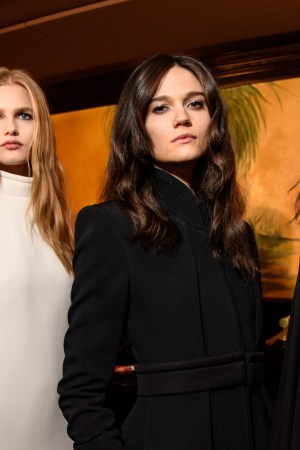 Brandon Maxwell is redefining what it means to be an eveningwear designer, a distinction that gets less credit than it deserves, for a new generation. His second collection of mostly black with a few white looks included separates — a taut, cropped velvet jacket and cuffed skinny pants, for example — but it was most definitely evening driven, a fresh, swanky take on it, too.

He presented an idea of glamour from the eyes of someone who spent his childhood steeped in small-town, department-store glamour (Maxwell’s grandmother ran a store in his hometown of Longview, Tex.), and grew up to be the personal stylist to the most progressive red carpet act in Hollywood: Lady Gaga. The lineup was a clever blend of avant-arch modernism and classic debutante pageantry. Each model made a grand entrance down the mini flight of stairs into the dining room of the Monkey Bar, pausing to sashay before the intimate audience, including Gaga, who, along with Maxwell, came straight from the Grammys in Los Angeles the night before. An old-school MC would not have been out of place: “Introducing Miss Imaan Hammam,” who closed the show in a fabulous ivory off-shoulder “gown jumpsuit” with fluid wide legs and a sweeping train that fell from the shoulder blades.

Silhouettes were sharp, with an emphasis on sculptural wave and curve details, such as the stand-up collar of a jacket and the structured, petal-shaped bodice of a top. There was a winking level of kitsch to the collection. A caped, off-the-shoulder, A-line swing mini seemed to mock Seventies flamboyance as it made the look chic. In a way, it felt like Barbie’s fantasy wardrobe post-Dream House, after a few years spent earning her razzle-dazzle in the dark real world.