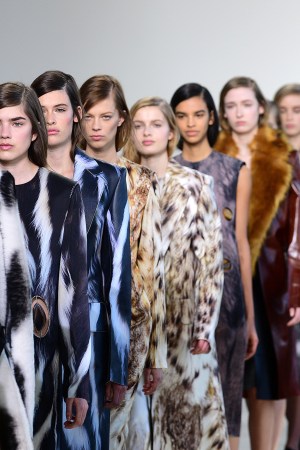 “Was that a little ‘Justify My Love’ moment?” guessed a retailer congratulating Francisco Costa on a beautiful — and yes, sexy — Calvin Klein Collection after the show. Costa didn’t specifically credit Madonna’s controversial 1990 music video as an inspiration, but the association wasn’t off the mark. “It’s the night before and the morning after,” Costa explained.

An undercurrent of S&M-laced erotica pulsed through the lineup, a fantasy wardrobe for the open-minded, intellectual woman who is a bit of a dom. The show kicked off with polished androgyny: two black silk wool suits cut in oversize mannish proportions over black camisoles with suspender straps and shiny belts worn loose and undone for a tony spank of bondage.

The house of Calvin Klein has a long history with the sexually provocative. But nowadays it’s almost impossible to shock with sex, so Costa didn’t try to. The feat here was making interesting clothes sexy. Never vulgar, Costa crafted his allure out of deconstruction techniques that bore the influence of the avant-Japanese, minimalism and a slight goth attitude. Tailoring came traced in raw tacked top stitching. A series of excellent mixed plaids — tailored coat, jackets and simple dresses — were pieced together from spare panels done in different patterns. It was an exercise in patchwork at its least crafty. There was a major fur moment on urban savage coats, some in slick shiny leather and a few scarves, which were basically large fur-coat collars minus the coat. It was a big, surprising statement: All the furs were faux, made of very convincing knits. “I stand for a house that’s not for fur,” said Costa. “It was a study on how to develop great knitwear that looks like fur.”

Also new and surprising were Costa’s ideas on embellishment. He inset sizable geodes, which he brought back from a recent trip to his native Brazil, so they appeared suspended in the middle of garments. A long-sleeve, magnified skunk-print dress had a geode on each hip, and two black plisséd styles featured single geodes set in ovals on the midsection, like a piece of statement jewelry for the dress. It didn’t shock, but it awed.