Creatures of the Wind RTW Fall 2016

Designers Shane Gabier and Christopher Peters were inspired my midcentury graphic and object designers for their fall collection. 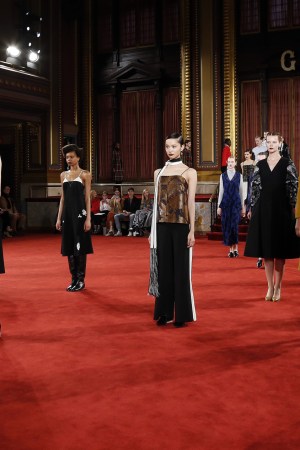 Knife. The title of Shane Gabier and Christopher Peters’ Creatures of the Wind show didn’t proclaim an aggressive lineup, or one cutting edge either in attitude or silhouette. Rather, in a one-word snippet of fashion irony, the designers chose “knife” as representative of an ordinary, functional item that can be elevated through design. “We looked at a lot of our favorite objects and graphic designers,” Gabier said backstage, noting Carl Aubock, Charles and Ray Eames and Ikko Tanaka. Tanaka, he said, “approached modernism with these very graphic shapes, but always with this round, soft edge.”

Here, the “graphic” came in clean, unfettered lines and blocks of textures and colors; the “soft,” in the graceful swing to the back of a camel coat, the fit-and-flare of a short-sleeve herringbone coat and the ease of a long, side-slit sweater over cropped pants. A Fifties-something aura permeated some of the silhouettes, subtle enough so that it could have been subliminal — which is a good thing. It’s always a challenge for designers who attain recognition on the merits of eccentric iconoclasm — certainly the case with the Creatures’ guys — to channel their visions into marketable fashion while retaining the essence of what got them noticed in the first place. Here, they did so beautifully, even if they hedged once or twice with some vaguely mod looks — a body-con red-and-white sweater over red leather skirt; a white crepe dress with black crystal straps. Though fine, these felt gratuitous, unnecessary streamlined alternatives to the more fluid volumes that dominated.

Creatures of the Wind RTW Fall 2016

In a significant application of the midcentury concept of elevating the ordinary, Gabier and Peters had their way with the basic shirt. They sliced the sleeves vertically, adding a row of buttons for closure. By leaving the buttons undone over long-sleeve turtlenecks, they emphasized layering and added an element of controlled, unexpected movement.