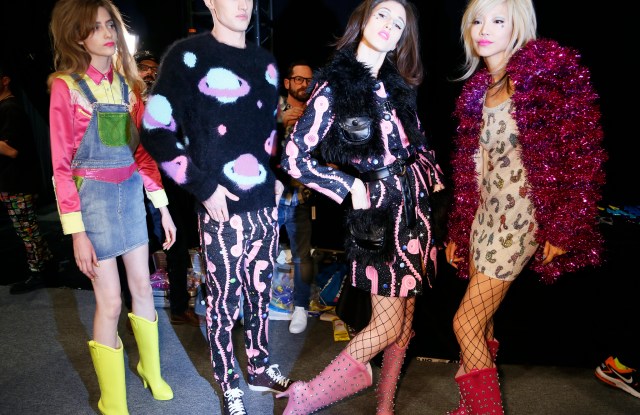 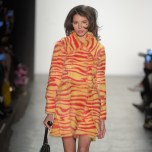 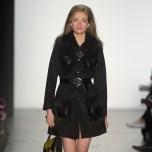 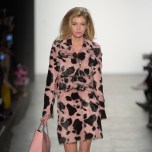 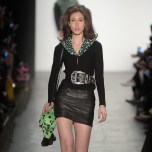 “Cowboys and Poodles”…and outer space. And Pop Art. And cartoons. And etc. The latest campy collection from the imaginative mind of Jeremy Scott featured a mishmash of influences — most of them retro — all of them working together in an assortment of candy colors. “I was inspired by cowgirls and poodles all gussied up for a night out,” he said, “poodles” referring to Fifties girls in circle skirts.

Scott’s lineup didn’t feature those classic poodle skirts, but his guitar, musical note and telephone motifs nodded to the era’s girlish style. His sexy, all-star runway cast included Karlie Kloss, who opened and closed the show while touching her hips to demonstrate exactly how sequins changed shape on a silver and pink minidress. Elsewhere, the lineup’s Western shirts and cowhide-printed denim — styled with rhinestone-buckled belts — leaned honky-tonk. The collection featured graphics galore: from the Nineties cartoon Ren & Stimpy to Pop Art that riffed on the work of Roy Lichtenstein. It was kitsch overload, but somehow it all worked.

A few bodycon Lurex knit looks were studded with giant circular beads reminiscent of Christmas ornaments. “But how would she sit down in that?!” mused one editor in the front row. It didn’t matter much; Scott’s cowgirls seemed like the sort who’d rather be up on their feet square dancing, anyway. Most of them wore high-heeled plastic cowboy boots, a collaboration with Melissa. Yee-haw?