Marc Jacobs closed out New York Fashion Week. In a word, it was extraordinary. 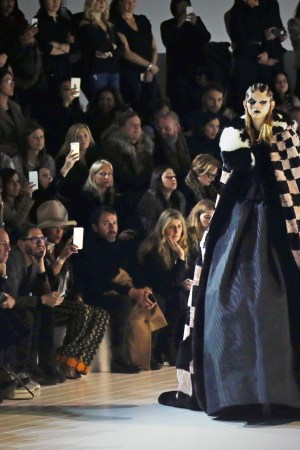 “I felt things I’ve never felt before.” “They should put him at Dior.” Two sentiments heard while exiting Marc Jacobs’ extraordinary show on Thursday night.

One could go on forever about this show, or say nothing and let the pictures talk. Marc Jacobs is a company in transition. We all know that. The integration of the expanded price structure of the Marc Jacobs brand after the shuttering of Marc by Marc Jacobs is a work in progress; full realization wasn’t going to happen overnight.

What is not in transition: the passion of the designer. Nor his talent, nor his belief in fashion, in its power, its ability to impact those who participate in it in a deep and meaningful way. Nor his refusal to cave an iota in his creative resolve.

There’s endless discussion today about all of the topics radiating from fashion, yet not much on what fashion is and why it matters. Then, at the end of the long first week of the season, a reminder, one as big and unsubtle as Jacobs’ gigantic coats, sweaters and broderie anglaise vinyl skirt. Fashion matters because it’s interactive, and not in the click-it-buy-it-now context.

Given something meaningful to react to, we react. No one could have walked out of this show neutral. While anecdotal evidence suggests overwhelming affirmation, some in the audience might have thought he’s gone nuts. No one thought, “OK. What’s for dinner?”

Jacobs showed his extravaganza of fashion noir on a stark white set to the sound of single chimed notes by Japanese musician Keiji Haino. (This recalled Rei Kawakubo’s long-ago ping soundtrack.) Darkness ruled, but with an underlying sweetness. The models’ eyes and lips were black. The clothes were dark, wondrous, inventive, eccentric pilings of tweeds, furs, silks, and endless decoration, Victoriana meets Goth meets Biker Chic meets Varsity Chic meets Red Carpet meets Violet Incredible and countless other girls of Jacobs’ runways past. Cats, rats, cherubs and ballerinas got acquainted on prints, a giant raven took up residence on the back of a jacket and a lady named Gaga walked the show.

It was 12 minutes of a million ideas, not ideas to buy today and wear tomorrow, but ideas to be considered with great care and sold as real fashion, and ideas to be distilled into real fashion’s more commercial derivative.

“I mean, it’s just fashion,” Jacobs said during a preview. Just fashion. The stuff of passion.