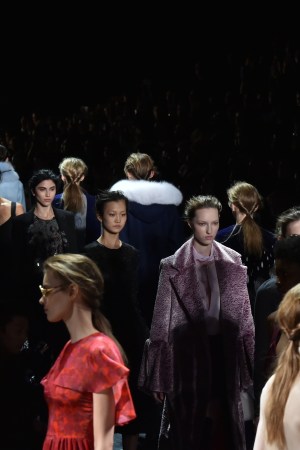 Prabal Gurung’s fall show notes promised a “softening of silhouettes and an ease in shape with oversize coats and effortless knits,” and he wasted no time delivering on it. The first two looks were a snow white duffle coat with a generous white fox-fur collar over a swishy lace godet skirt, and an elongated white hand-knit sweater with crafty pewter stitch work over a similar base. Fairy tales were in the air, on Valentine’s Day, no less.

Gurung used Henri Rousseau’s “Woman Walking In an Exotic Forest” and Lord Byron’s “She Walks in Beauty” as reference points, possibly working off their titles alone. The collection’s pretty romance could be taken at face value, too — the narrative was a bit textbook. Gurung dressed his heroines in chaste silhouettes, such as knee-length dresses with long sleeves and high necks, then sliced them up the thigh or around the shoulders to show their modern, undone sexy side. Many of the slits and slashes were trimmed in covered buttons, another flirtation with old-school modesty. It worked well on the dresses, but not so much on the legs of tailored trousers.

During her walk in the exotic forest, Gurung’s woman must have spotted a deer. How else to explain the range of fawn-printed looks, including a calfskin and long-haired shearling vest and a leather wrap skirt? The show closed idealistically with a white gown with cutout shoulders and an embroidered chiffon train worthy of a winter bride. Presumably she lived happily ever after.