Proenza Schouler's Jack McCollough and Lazaro Hernandez showed a fall collection that was an exploration of "control and release." 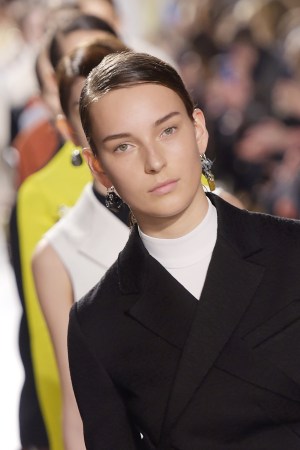 Program notes for Jack McCollough and Lazaro Hernandez’s Proenza Schouler collection cited American art of the Sixties and Seventies as an influence. In a synergistic coup, the designers showed at the Whitney Museum of American Art — the first fashion show at the museum since its move downtown last year to new, spectacular modernist digs. It proved a compelling venue, functional as well as visually arresting, and gave the show a wow factor before the first look appeared.

That wow would temper a bit as the show progressed; the clothes were impressive, but not quite to the level of Proenza’s previous two efforts. The fall collection, the notes read, would explore “notions of control and release.” In terms of craft and the technical aspect of making clothes, that meant experimentation with cut and silhouette — when to hug the body, when to let loose with fabric, how to expose skin while avoiding vulgarity and cliché.

Two silhouettes anchored the lineup. Tailored looks featured long jackets, their shapeliness achieved via twisting of the fabrics and asymmetric closures, worn over low-slung, wide pants in fluid fabrics. Dresses kept close to the body on top, releasing into languid skirts. Either way, lacing figured prominently, for both decoration and function. McCollough and Hernandez worked it with precision, creating graphic interest and using it, for example, to replace seaming in a bright yellow chrome dress made in three parts: yoke, bodice and skirt, joined by wide white lattice lacing. The technique also allowed the designers to push further with discreet exposure of the body — a concept they’ve experimented with for a while — to powerful effect. Dresses made of horizontal bands of fabric left open here and there also offered glimpses of skin, and played as a new take on bandage dressing, relaxed and modernized. Skinny-ribbed knits engineered in neatly collaged patterns, with slits at the waist and shoulder, looked great.

McCollough and Hernandez are deliberate creators, exacting in their vision and application of design tropes. In working through the control-release relationship, the former ultimately won out. The result was a collection that worked a simmering sensuality.