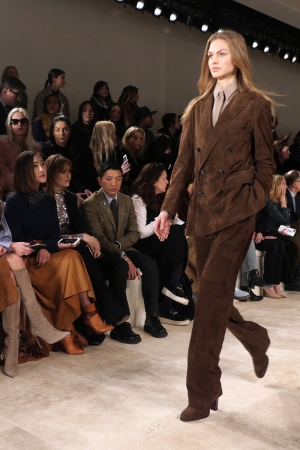 England swings — in many directions. Just ask Ralph Lauren. The collection he showed on Thursday morning worked two sides of his affinity for British style to lovely effect.

“It starts with real luxury,” Lauren said backstage before the show. “Everything is super soft, super sophisticated. Then it starts to build.”

Lauren opened with a treatise on everyday polish of the toniest sort. It came via a men’s wear-inspired group that made subtle reference to English country life, particularly in the fabrics, luxurious mixes of cashmere knit, flannel, plaids, herringbones, all in the warm palette of the outdoors — taupes, browns, lodens. While rooted in classics, the clothes had a currency delivered via new proportions and an ultrarelaxed attitude. If at times it felt a bit too quiet, the genuine refinement refreshed after a long, noisy week, and the clothes looked strong.

Karlie Kloss got it going in that most unfettered of outfits — cardigan over shirt and pants — setting the polished tone. What followed centered on smart, mannish tailoring in impeccable coats and jackets, many double-breasted, over pants and skirts. Yet several standouts digressed from the tailored norm: A tartan sweater and skirt suggested a high-brow coed, while ruggedness came in a brown wool ranch coat with what looked like an Aztec design around the middle. Best of all: a clutch coat in a patchwork of multiple brown tweeds.

Lauren then left the countryside for feistier territory. “I wanted to go into this rock ‘n’ roll [mood],” he said. While short, tight little black dresses will suit good girls with rock-chick fantasies, frock coats and Amadeus frills projected a cool factor that would have played well in Seventies London. Broken down, the pieces — such as a gold-and-blue pigment-printed coat — will resonate beautifully in the here-and-now.

So, too, Lauren’s eveningwear. Hollywood stylists should rush to get dibs on the pleated velvet gowns. They radiated modern glamour.