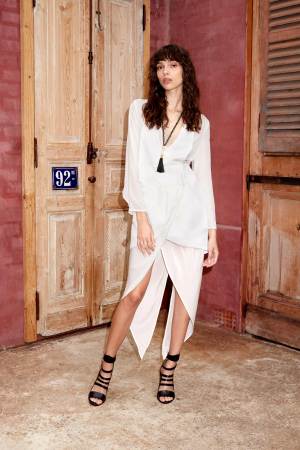 Rawsthorne is a seasoned designer, having helmed her own namesake label in Sydney for several years with later stints at Ksubi and the Australian chain store Witchery. Fall marks her first official collection for Sass & Bide, one inspired by travel and collecting. “We were thinking about taking a meandering trip through Morocco,” she explained during a walk-through at the brand’s SoHo flagship.

The reference parlayed into an eclectic collection of suiting, dresses and inventive, woven knits marked by metal embellishments and colorful embroideries reminiscent of the North African country. Fluidity and ease ran throughout the lineup, seen in sexy silk dresses and loose culottes and harem trousers done in abstract geometric and brushstroke prints. Updated denim styles featured rips and hand-embellished detailing. A dose of glamour — such as a decorated strapless peplum top and a navy and white striped sequin suit, which recalled Seventies rock ‘n’ roll — punctuated the casual looks.