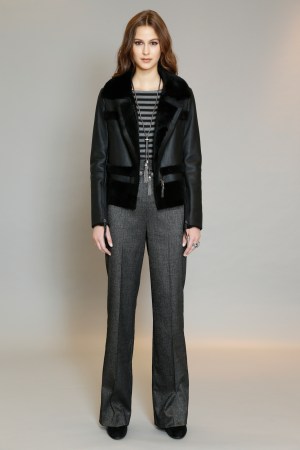 This season, designer Greg Myler took his cues from bygone eras. He infused St. John’s fall collection with straight-out-of-the-Seventies references such as lean midi-length sweater coats and textured silk tie-neck blouses. There were romantic bohemian/folkloric touches, too — ruffled sleeves and stencil-patterned knit dresses — that imbued the line with a soft, feminine vibe, despite the stark black, white and gray palette.

But the real highlight was the outerwear, which featured luxe looks in rabbit fur, leather, shearling and double-faced cashmere adorned with velvet fringe and tassel detailing. Standouts included two jackets: a motorcycle style with an oversize eyelash tweed and a structured, knit number with decorative silver buttons and braiding that imparted a military motif. St. John’s has long been a favorite of politicians and political spouses; now it seems to be aiming for the officers’ wives as well.