Amy Smilovic borrowed from the boys in her latest Tibi collection, which emphasized strength and ease. 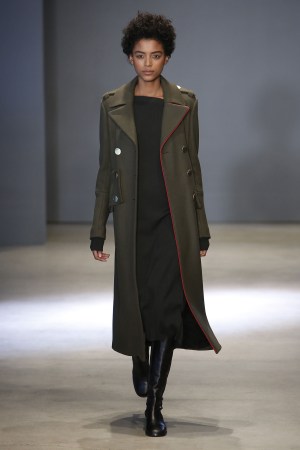 Amy Smilovic borrowed from the boys in her latest Tibi collection, which emphasized strength and ease. The inclusion of a few male models on her runway drove the point home. “It just felt really natural,” she said of the casting. “The way a woman wears a guy’s jeans — a guy can wear a woman’s, too.”

Smilovic’s oversize wool suiting certainly had a cool, androgynous appeal. She also played with length and proportion, exemplified in the dominant pant silhouette for the season: a roomy, wide-leg cargo trouser. “It was about things that you swim in, and that still feel feminine,” she said.

A few looks nodded to military styles, most notably a series of navy and Army green tailored coats decked out with gold buttons and red trim. Rendered in a natural palette inspired by the paintings of American figurative painter George Tooker, fall fabrics included a mish-mash of velvet, mohair, metallic lurex and sequined knits. Liquid silk slipdresses and sheer lace blouses made it all effortlessly sensual.