Ahoy. Tommy Hilfiger hit the deck hard for fall, transforming the Park Avenue Armory into the T.H. Atlantic and leaving no sailing cliché out to sea. 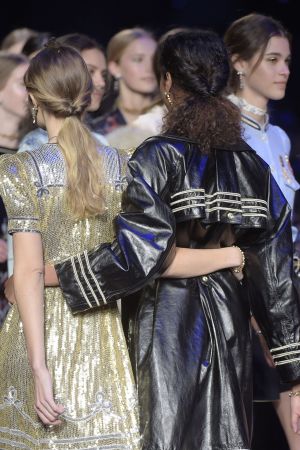 Tommy Hilfiger hit the deck — hard — transforming the Park Avenue Armory into the T.H. Atlantic, a massive, global-bound marketing vessel, leaving no nautical motif out to sea in his fall collection.

Set up like a giant, early 20th-century passenger liner under a starry night sky with VIPs seated on the poop deck, the show was a Tommy Hilfiger theme park. Last week he disclosed his plan to get aboard the consumer-facing format for spring 2017, but hasn’t he already? The clothes ranked as third mate, behind photo ops and production razzle-dazzle.

The cutesy takes on admiral jackets, stripes, sailor pants and tops and Thirties-era printed silk dresses with Peter Pan and sailor collars were executed with a high level of polish — they looked expensive, and will not sell for cheap — yet the impression was too kitsch to navigate beyond the runway. Amusing though it was, the ride on the T.H. left some searching for their sea legs.