To Kanye West's credit, he staged an unprecedented event, fashionwise, for the third season of his Yeezy-Adidas collaboration. 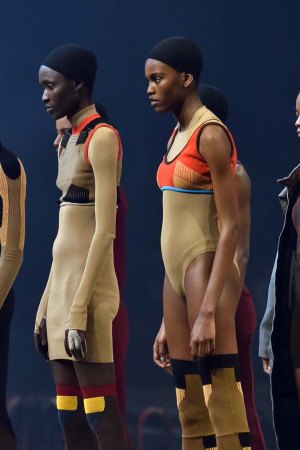 The pressure to write something profound, a meaningful analysis of Kanye West’s Yeezy Season 3 spectacle. To his credit, he staged an unprecedented event fashionwise, combining the third season of his Yeezy-Adidas collaboration with the debut of his new album, “The Life of Pablo,” and making it a consumer ticket-holder event — at a time when the whole traditional fashion world is contemplating doing the same — at no less a venue than Madison Square Garden. It’s too early in the season to tell, but it will be difficult for any designer that follows to upstage Yeezy.

There’s no denying the concept was exciting and intriguing in the lead up to Thursday’s event. The actual experience was fascinating, also confusing and in the end, way too long (doors opened at 3 p.m.; it ended around 5:45 p.m.)

Musically, it wasn’t a concert, “it’s more of a listening party,” noted Zach Storm, 19, of Long Island, who was wearing a Vetements sweatshirt over a Yeezy T-shirt while waiting in line to buy a beanie, part of the event merchandise for sale on site, for his girlfriend. There were also hoodies and T-shirts for sale that said “I Feel Like Ye” on the front and “I Feel Like Pablo” on the back. Storm declared himself a fan of West’s fashion, but said he wouldn’t have paid $275, the price of his ticket, “for just a fashion show.” A listening party is when a musician plays his or her new work, in this case, “The Life of Pablo,” for a live audience.

If the event wasn’t a concert, it wasn’t really a fashion show either. West continued his collaboration with Vanessa Beecroft on a “performance” that basically looked like a Yeezy-clad refugee camp penned in in the center of the floor. There were hundreds of “performers,” most of them African-American or of mixed race, wearing the new collection of tattered sweaters, oversize dusters, bodysuits, tanks, hoodies and shearlings that weren’t so different from past Yeezy product. Some colorful stretch knits looked new, as did a focus on orange and rust.

The production had visual impact. To see such a vast group wearing variations on a uniform, some standing in linear formations on two elevated platforms — men on one, women on the other — with a large Gen Pop milling listlessly or standing still on their feet, all of them wearing sullen, bored or sad expressions, made an impression. It felt serious, especially in light of current events, as closeups of expressionless faces played on the Jumbotron. But it was difficult to draw a conclusion about West’s message.

At one point a series of black supermodels from the previous generation, including Naomi Campbell, Veronica Webb and Liya Kibede, most of them wearing bodysuits and ostentatious fur coats, came out on the platform, posing for photographers who were dressed like gritty war-zone photojournalists. Meanwhile, on the sidelines were the Kardashian-Jenners — Kim, Kendall, Kylie, Kourtney, Khloé, Kris, Caitlyn and North and Lamar Odom, whom West personally escorted in. The women were decked in egregiously tacky pink and ivory furs and blingy embroidered dresses that West revealed were designed in collaboration with Olivier Rousteing of Balmain, who was also in attendance. Kim’s platinum hair matched her outfit. Why? It was a vexing, tone-deaf contrast to the statement West seemed desperate to make with his Beecroft performance art.

West was positioned to the side of the installation, playing his album, which sounded fine to the ears of a musically ignorant fashion critic, surrounded by his high-profile music collaborators, who danced along to the playlist while he intermittently talked playfully to the audience.

“Tell me how y’all feel about the clothes?” he asked.

“Make them cheaper,” yelled someone from the rafters.

West promised more accessible prices and wider product distribution were to come. “Seriously,” he said of the prices. “That’s just learning curves whenever you start a brand.”

West didn’t clarify the message or inspiration for the collection and performance concept, but he did make clear that there are bigger ambitions to come. “It’s my dream for at least a couple years to be the creative director of Hermès,” he said. Shorter-term goals include a video game based on his late mother’s arrival in Heaven. He screened a teaser. Twice. “That’s not easy to do, man. You all acting like this sh*t is regular,” he said before cuing up the video of an avatar of his mother, who died in 2007 due to heart disease following a surgical procedure, bursting through clouds in the sky. The working title is “Only One.” Coming soon, the trailer promised.