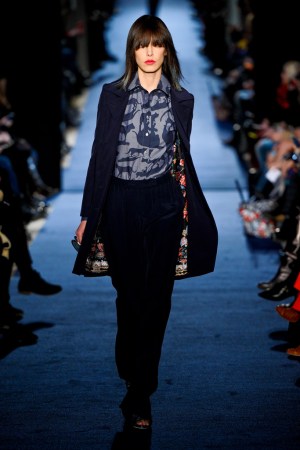 “Life is a catwalk!” Alexis Mabille proclaimed backstage before his show.

That attitude is one way to beat the winter blues. But, beyond the quotable quip, Mabille was making a point about how women use clothing as part of a performance. “It’s the parallel between the catwalk and a cat’s prowl, because all women are cats to some degree: seductive, power girl, sporty, masculine-feminine,” he reeled off.

The designer, who loves a gimmick, could not resist taking that comparison literally by filling the catwalk with felines. Their outlines appeared on a chambray fabric to form what he dubbed a “cat-mouflage” pattern, while big black velvet cats were plastered across sweatshirts — their paws dangling below the hem in a cute touch.

At its core, the collection was all about Parisian chic, blending boudoir elements such as lacy slips and slinky pajama suits (some coated in sequins) with military-inspired outerwear in an inky palette — a sweeping cape coat, for instance, or a cashmere peacoat with gold buttons securing a throat latch.

The influence of Yves Saint Laurent was not far, and Mabille — who is an avid collector of vintage clothes — said he had borrowed from the legendary couturier’s repertoire with the choice of a bold shade of pink that Saint Laurent named Paris. It worked best on a plain oversize coat with a red collar and gold buttons.

Elsewhere, the vibrant shade looked almost crude, especially when set against a sea of sophisticated navy. Plastic rain gear was another discordant touch, though a point d’esprit tulle dress featuring two kissing kitties should be catnip for celebrities who crave a photo-op.