Andreas Kronthaler tapped spiritual references in his first collection as the principal designer of the label. 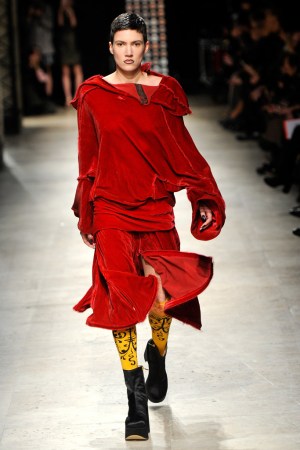 The spirit of punk was alive and well at the inaugural Andreas Kronthaler for Vivienne Westwood show in Paris, though perhaps not in the way the designers intended.

Guests were not allowed into the venue until 15 minutes past the official starting time, as rehearsals were still underway. Front row seats were overallocated, and Suzy Menkes ended up moving to the fourth row to make sure she would get out of the venue in time for the next show.

The collection, titled “Sexercise,” was all over the place. Show notes detailed a series of elaborate explanations for the looks, but they could be loosely summed up as “Buddhist nun meets cross-dressing techno raver.”

The unisex fashions were shown on both women and men. Belgian hunk Arnaud Lemaire walked in a silver loincloth paired with patterned tights and shearling over-the-knee boots, topped with a tartan cape coat. Another male model wore a baby-blue striped Beatles suit with slingback platform heels.

The women’s looks included stretchy knits in spice tones and suits with extrawide shoulders, à la David Byrne in “Stop Making Sense.” Dresses were draped and knotted around the body like religious robes.

It was the first time Kronthaler, Westwood’s longtime design collaborator and husband, had his name on the collection, previously known as Vivienne Westwood Gold Label. “Frightening,” was how he summed up the change, part of an effort to streamline and clarify the label’s branding and product offer.

“I kind of made it a bit more personal,” he said backstage. “Vivienne is always a big campaigner and she always wants to say things, express things, and maybe I want this too, but I gave it this very spiritual look. I thought it was a good look. You can’t have enough of spirituality in this world.”

The sexercise part, he suggested, consisted of blurring gender codes rather than creating titillating outfits. Westwood noted she was one of the first designers to do this. “I like very much the idea of wearing your husband’s clothes,” she said. “It’s good for the environment that you don’t need to buy so much, you can share your clothes.”

Her next suggestion was even more eco-friendly. “It’s kind of punk because you can do it yourself, you know, you can get any of your old clothes and just shove a towel over it or put a drape over it, you know, and that’s how I want people to buy it. I would love to see men walking down the street with these dresses on,” she mused.