Anthony Vaccarello was in an open, experimental state of mind for fall. 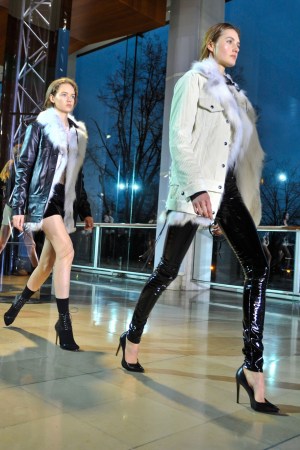 There was heightened attention on Anthony Vaccarello this season. He’s collateral in the high-profile rumors that Hedi Slimane will soon be out at Saint Laurent; his likely replacement: Vaccarello. Whatever is in the works — he wouldn’t comment on the subject backstage — something put him in a noticeably more open and experimental state of mind for fall. The collection was different — more diverse.

Vaccarello has established a very precise look — short, fast, sharp and seductive with an emphasis on exposed flesh and asymmetrical cuts — and draws narrow thematic lines within which to work season. This time he lifted restrictions. “There’s no theme,” he said. “It’s my vision of freedom.” Getting specific, Vaccarello mentioned Princess Stéphanie of Monaco in the Eighties, her smoldering, white diamonds and black leather phase, as well as big shoulders and variations on T-shirts, which came in sporty, bare perforated black dresses. The show opened with a corset concept. There was only one classic bustier — lace, worn with a mannish blazer and trousers. Otherwise, Vaccarello cut a cool, black blazer with corsetlike laces instead of traditional buttons. There were stretch wool laced minis with laced-up with hemlines that missed flagrant indecency by mere centimeters. A thick black leather hoodie dress with laces at on the bottom felt like something new.

Lean and all legs, the lineup was signature Vaccarello, which will never classify as relaxed, though it certainly demands an innate sense of confidence and comfort with the body. Yet there was a sense that he allowed himself, and the clothes, more breathing room. Past all the slick black tailoring with bands of diamonds (real or fake couldn’t be determined from the runway) around the sleeves, and wispy, studded sheer tanks that floated over skin-tight jeans, came a more expressive portion of the show: two oversize ivory corduroy jackets lined in thick white fox; a black leather blazer over a perforated mini with red, curly cut leather insets; and, finally, a series of pretty, vividly colored sequined florals.

“I really wanted to have something happy and positive,” Vaccarello said of the flowers, which also nudged at romantic. It turns out the master of sexy has a soft side.