A powerful argument for slow fashion, the collection was full of new shapes and embellishments from a designer stereotyped for curve and cling. 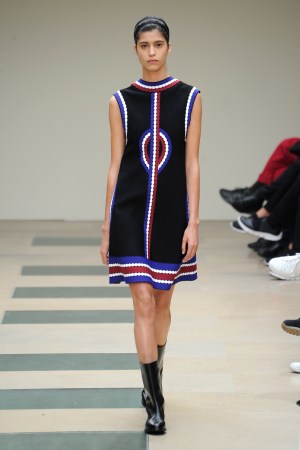 Sunday, almost one month after the end of Paris Fashion Week, brought glorious springlike weather and coincided with the 40th Paris marathon — as well as Azzedine Alaïa’s fall show. The designer is apparently as impervious to time as a mountain range. See-later, buy-later seems to be his counterintuitive slogan.

Alaïa told WWD he opted to present his collection much later than everybody else  in Europe simply because his clothes can’t be made with a stopwatch. “I took the time necessary to create them,” he shrugged after the show, as guests rushed to congratulate him. Here was a powerful argument for slow fashion: a diverse, sleek and considered collection full of new shapes and embellishments from a designer stereotyped for curve and cling.

Consider the fabulous outerwear. Long a go-to guy for body-con dresses and flaring skirts, Alaïa turned out a range of generous, cocoonlike coats in glossy leathers or fancy, curlicue jacquards. A-line coats boasted the same swaying, follow-me volumes at the back, occasionally harnessed with a belt placed at the level of the bra strap.

There was no shortage of his signature knit dresses, the sleeveless looks that opened the show boasting deep armholes and playfully arranged rows of colorful dots. The textures of other knit dresses were typically dense and matte, resembling mounds of talc and gunpowder — until Alaïa let loose with micro sequins, embedding them in the chevron valleys of his knitted marvels, or etching them sparingly as graphic lines on monastic black gowns with asymmetric hems. He usually reserves such intricacies for his couture clients, the designer noted.

It’s also impressive how Alaïa can ping between austere, mannish tuxedos and nearly naked lace gowns, the latter lending his admittedly long-winded show a hot-blooded crescendo. His alluring tailcoat boleros, the fronts framing the rib cage, seemed to sit between those two extremes.

The filled-to-capacity crowd included the designer’s devoted client, the model Natalia Vodianova. Though expecting her fifth child in June — a vivid blue Alaïa sweater vest was stretched over her belly — Vodianova  has not eased up on her charity works. She is organizing her next Love Ball on July 6 during couture week that will feature an art auction and a black-tie dinner for 250. It will be held at the Louis Vuitton Foundation with luxury titan Bernard Arnault hosting the event in aid of Naked Heart programs for disadvantaged children in Russia.

Tucked in the second row was French musician Nicolas Grodin, one half of the electronic duo Air. After seeing the collection, he composed original music for the show. Sensing that every exit told a story, he opted for only instrumental versions of songs, “so people would focus on the dresses.”

Although it was sweltering in the venue, and unpardonably late for a fall show — they did.