In the most anticipated show of the season, Demna Gvasalia's debut for Balenciaga, the designer focused on creating a modern haute attitude via inventive constructions. 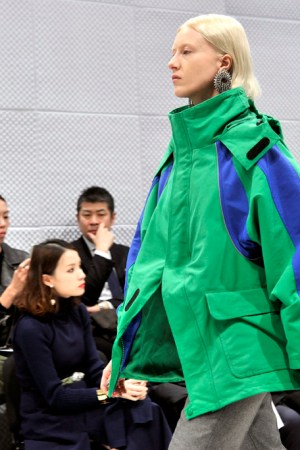 A promising debut, but hold the canonization.

Demna Gvasalia is one of the hottest names in fashion right now, not to mention its biggest curiosity. Only a year ago he erupted from obscurity with the ubercool phenomenon that is Vetements, seizing the creative reins at one of the most hallowed names in fashion. His Balenciaga debut on Sunday ushered in the next chapter in the life of the house. Along the way, Gvasalia proved himself unintimidated by the major stage, as he brought to the collection both historical curiosity and a strong sense of self. The result was an interesting, often chic fusion of couture and (the designer’s denials aside) street references.

Upon his arrival at Balenciaga, Gvasalia said during a preview: “My first priority was to understand the methodology of Cristóbal, his work around the body, and how to do it today, in 2016.” He studied photos of Fifties couture and how the haute models of the day posed, with rounded shoulders, their abdomens concave, “a C-curve.” He sought to replicate that sense of forward movement through cut rather than body language. At the same time, he held fast to his Vetements approach. “I start the season with a list of clothing: double-faced clothes, tailored jackets, three-quarter-length skirts, etc.,” he said, now determined to “put those garments in a Balenciaga context.”

Gvasalia did so beautifully with coats and skirts cut to move forward with a woman’s gait; they projected haute refinement while looking fresh and genuinely new. Less successful: the padded hip. Whatever its allure for designers, it’s just not going to happen at retail. Gvasalia gave it a twist, literally, moving it inward toward the front of the torso in pursuit of that archival couture silhouette. Along the way, he provided an answer to one of fashion’s most burning questions: “Honey, does this make me look fat?” “Yes, dear, both coming and going.”

Conversely, the models looked great in other extreme silhouettes: enormous, intricately crafted multiprint collage dresses and power-woman parkas. Cut to fall off the shoulder and move forward at the hem, these paired with stirrup pants and stilettos encrusted with major crystal work. While the latter were meant to recall opera coats of yore, and did, to a degree, they also spoke to Gvasalia’s love of the essentials of street dressing.

What can’t be said of this collection: where it’s going. The problem with the currently au courrant “wardrobe” approach to the runway is that it offers many options and often, little vision. It’s fine for Miuccia Prada to design for, as she said, “different characteristic moments” in a woman’s life; she’s Prada, and it rocked. Gvasalia rooted his premise for Balenciaga in cut and construction, so there was a definite thought process in the works. But the result was too broad a swing, from good-side-of-the-Eighties racy to — what’s a nicer word for frump-ola? A designer runway collection that tries to speak to everyone runs the risk of not being heard in all the fashion noise.