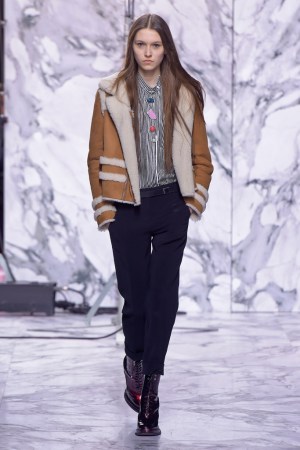 Adrien Caillaudaud and Alexis Martial set up a little narrative to guide their collection. The Carven girl was back in town from a trip to Kathmandu and ready to party with her friends. She absorbed the culture abroad and has assimilated some of her souvenirs into her sophisticated city wardrobe. The storyline was a tidy excuse for Caillaudaud and Martial to infuse newness via leather, suede, shearling, sherpa knits and some mountaineering style into their zippy contemporary look. They didn’t exploit the journey — the lineup was more urban Western than Nepalese.

The show opened with a tan shearling moto jacket over a crisp strikes shirt with colorful marble details and a pair of trusty black pants. Short, kicky A-line leather had high shearling waists. There were open gauge blanket scarves generously trimmed with fringe, and one of the best fusions of the exotic and citified was an oversize, boxy ivory knit cardigan coat with jacquard panels and a furry white collar over a shiny red moto zip-up and skirt done in structured folds.

Back in the city, it’s party time. “Step by step it gets more esoteric and dreamy with glitter and mixing colors and sequins,” said Martial. There was a shift from soft browns to gray, black, lilac and pink. The clothes were a little harder, faster and clubbier, but always on the sweet side. An apronlike shell with buckled straps in mixed Nepalese prints was layered over a knit turtleneck and shiny cuffed pants. A slinky stretch zip-up turtleneck featured a hazy sunset print of hands surrounding crystals over a mountain range. It was tucked into a fluid midi skirt with a slit. That’s esoterica for you.