As hackneyed as the sailor theme might be, the designer spied some fresh angles. 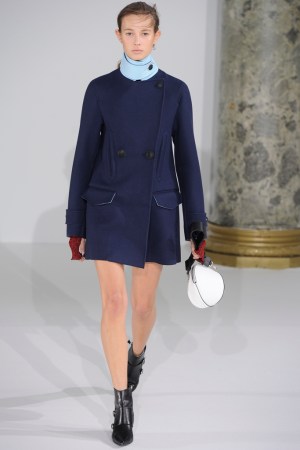 Cédric Charlier wins the dubious prize for Wednesday’s most off-putting soundtrack — a pummeling drone reminiscent of a foghorn. At least it was apropos of his sleek marine-inspired collection, whose chic managed to drown out the distressing noise.

As hackneyed as the sailor theme might be, Charlier spied some fresh angles, elongating the pea coat and modernizing it with unexpected button placements, for example. Dramatic throat-latches in white or sky-blue heightened the futuristic gloss.

As did twinkling surfaces, for the MS Charlier clearly houses a disco. Lurex and crystals turned up in middy-collar sweaters, on sailor pants and on apron-front pinafores.

Stripes — a signpost for Brittany as loud as any foghorn — came in an exaggerated scale for knit dresses, or etched on faux black leather dresses. There were yet more sexy touches, including clinging turtleneck sweaters with a contrasting, built-in bustier only for the seriously ship-shape.